Binter adds a fifth Embraer E195-E2 to its fleet 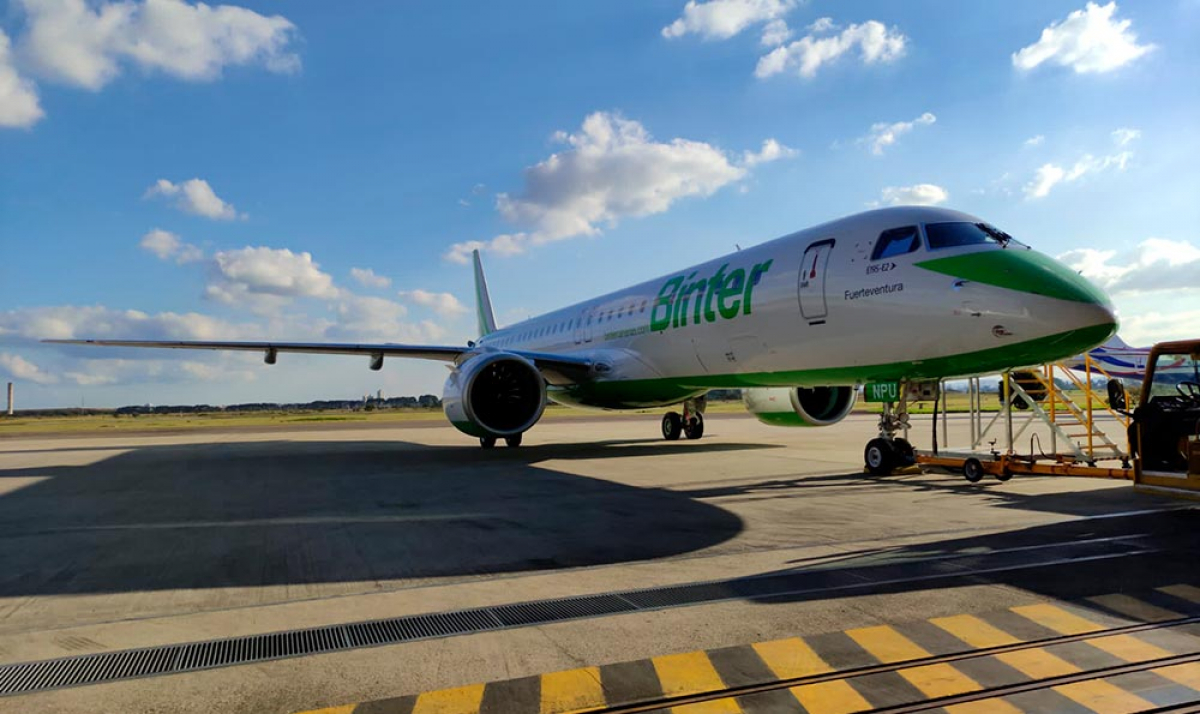 The airline will use these five aircraft for direct connections between its domestic destinations and the Canary Islands and to launch direct flights to its new international destinations and Tarragona.

It is the quietest, cleanest and most efficient single-aisle jet aircraft in its class.

Binter has taken delivery of the fifth E195-E2 ordered from Embraer. This aircraft completes the company’s fleet of this model which it uses to make most of its direct connections outside the Canary Islands and sometimes between the islands at peak moments.

The aircraft, which has been named Fuerteventura, will soon join the airline's operations along with the other four aircraft that have been added to the Binter fleet since December 2019.

This is an aircraft model that is particularly popular with the airline's customers due to its characteristics and performance. The E195-E2 is the quietest, cleanest and most efficient single-aisle airliner in its class, providing passengers with a highly comfortable experience as the aircraft, with a 132-seat configuration, features a 31-inch row spacing to enhance passenger comfort. It also includes an overhead compartment that can hold up to one carry-on item of luggage per traveller.

The aircraft also features significant improvements, allowing for a reduction in fuel consumption. It is considered the most environmentally friendly aircraft in its class and has the lowest noise and external emissions levels.

All set for new routes and the summer

With the arrival of this new aircraft, Binter is all set to strengthen its summer schedule and new international routes with regular direct flights to Tarragona and to the European airports of Toulouse, Marseille and Lille, in France, and Turin and Venice, in Italy.

With the addition of these new destinations to which Binter will start flying in July, there will be 94 direct weekly connections and more than 600,000 seats per year, between the archipelago and national and European airports, which will be operated by this Canary Islands airline.

All the flights will be operated using the five new Embraer E195-E2 aircraft. On all these international and domestic routes, Binter offers passengers the advantage of travelling, at no additional cost, to and from any of the Canary Islands, making the inter-island hop free of charge in the case of connecting flights, taking advantage of the more than 170 daily inter-island flights that the airline operates.

The purpose of this document is to inform you of the reasons why we collect your personal data, what we do with it, what your rights are and how you can exercise them, in compliance with Organic Law 15/1999 of 13 December, on the Protection of Personal Data, and the General Data Protection Regulation of the European Union.

Who is responsible for processing your data?

What do we use the data for?

We collect and process the information you provide us in order to respond to any questions you ask us through our forms, and to send you information related to our company’s activity that we consider to be of interest to you.

How long will we keep your data?

pWe shall retain your personal data for as long as you do not request us to delete it.

What is the justification for processing your data?

The legal basis for processing this data is your consent, which you can withdraw at any time.

To whom will your data be disclosed?

VIA, Promoción del Aeropuerto de Vitoria S.A. shall not sell, rent or make available to third parties the personal data you provide, unless legally obliged to do so.

What rights do you have?

You have the right to access your personal data, rectify inaccurate data or request the data to be deleted when no longer needed.

To exercise these rights, you must send an email to info@via.aero, specifying which of these rights you wish to exercise.

More information about your rights at the Data Protection Agency.